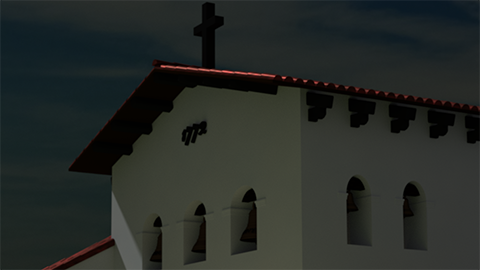 I'm still pretty new to 3D printing so to me it is still magic.  Create something electronically, send it off to a web site and in a week or so I can hold my creation in my hand...that's magic.  This project was to recreate the historic mission in San Luis Obispo.

This summer we had an event at the San Luis Obispo ('SLO' for the in crowd) mission.  This historic building was built in 1772 and I thought it would be a good subject to reproduce in 3D.

My initial target was the mission building, rather than the entire complex.  Modeling and scaling were relatively simple; original (-ish) floor plan sketches and reference photos were available online.   I wanted the finished 3D print to be a Christmas ornament, which wasn't ideal because the mission is rather long and not symmetric. 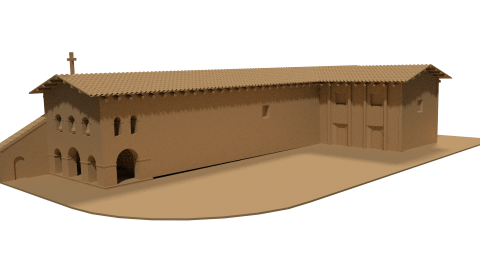 Since the main entrance, which contains the bell towers, were the most interesting portion, I decided to focus on a roughly cube-shaped boundary which included the entrance.

As I said, the modeling was straight forward.   There were, however, some lessons to be learned before the model was ready to send for 3D printing.

Despite all the opportunities to excel, I eventually was ready to send for 3D printing.  I have used Sculpteo for the few projects I have attempted.  I am very pleased with the results.  I haven't used any other providers, so I can't make a comparison, but I have nothing but good things to say about the Sculpteo website, process and final product.  They even provide renders of what the finished, printed product will look like. 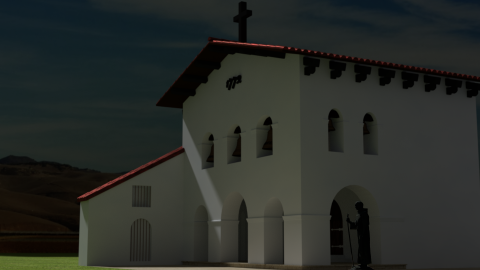